(2) Email that is not requested. Also called "junk email," "gray mail," "unsolicited commercial email" (UCE) and "unsolicited bulk email" (UBE), the term is both a noun (the email message) and a verb (to send it). Spam is used to advertise products or to broadcast political or social commentary.

A Social Plague
Like viruses, spam is a scourge on the Internet as billions of unwanted messages are transmitted daily. Unfortunately, as an advertising medium, spam produces results (see "Why Do They Do It" below). In order to reduce spam for their customers, ISPs have added many servers that do only filtering (see spam filter and spam account). Unsolicited phone calls are another form of spam and perhaps even more of a nuisance (see robocall).


Simple math. Suppose that out of 4,000 spam messages, one person buys something, and the spammer makes a dollar. If two million spams were sent that day, the spammer made $500, and the job took a half hour to set up. A few hours per week could yield $100,000 annually... enough incentive for techie teenagers? Of course, consistent revenue is not guaranteed, but there is ample motivation.

Filters Create Even More Spam
As spam filtering becomes more sophisticated, spammers send even more email to make the same profit. Email address lists can be hijacked or purchased for very little. There is a thriving business selling lists to spammers as well as lists of compromised computers (see zombie). There are even spam service providers that will do all the work (gotta love that entrepreneurial spirit!).

Easy to Rationalize
Spammers justify their existence by citing the huge amount of junk mail sent via the postal system, wasting trees and other resources. They also claim advertisers have been polluting the environment with radio, TV and billboard ads for decades. Nevertheless, a standard for authenticating email could eliminate most spam. Unfortunately, that is a huge project to implement worldwide (see email authentication).

This 2004 book was written by a spammer, known only to readers as "Spammer-X." For insights into the minds of real people who spam for a living and how they do it, read "Inside the SPAM Cartel." 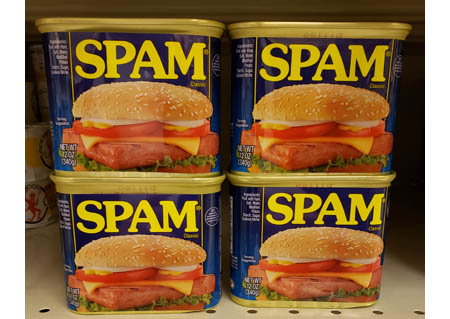 In 1970, a Monty Python sketch depicted a restaurant that included Hormel's spiced meat in every dish. In England in World War II, SPAM was always available while other foods were rationed. Spelled upper case, SPAM is Hormel's trademark.