A capacitor that has much greater energy density and power per pound than electrostatic and electrolytic capacitors. Used in myriad electronic circuits as well as hybrid and electric cars, ultracapacitors are also called "supercapacitors."

With a life cycle of more than a million charges, ultracapacitors are ideal for applications that require frequent, fast charges and discharges, such as hybrid vehicles that are constantly braking and accelerating. However, since they have much less energy density than storage batteries, they do not serve as a long-term energy source. 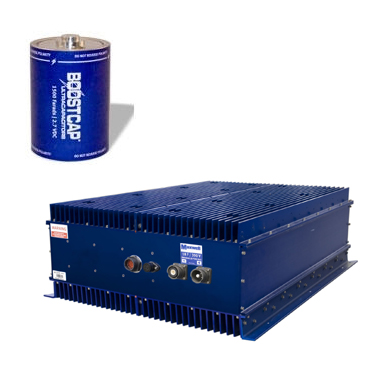 Maxwell's BOOSTCAP (top image) is a soda can-sized ultracapacitor used in multiples. The size of a coffee table, the 390 volt hybrid bus module (bottom image) holds 144 BOOSTCAP ultracaps that are charged when the bus is braked and discharged when it accelerates. (Image courtesy of Maxwell Technologies, www.maxwell.com) 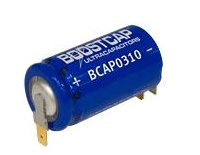 This Maxwell BOOSTCAP is the size of a flashlight D-Cell. With pins for circuit board attachment, they are used in multiples for numerous applications such as smoothing out incoming power to telecom equipment and turning a windmill into the wind. Smaller BOOSTCAPs are used to power wireless readings from utility meters. (Image courtesy of Maxwell Technologies, www.maxwell.com)