The divisions of the plug in phone, mini-phone and sub-mini connectors that represent the different conductors. Tip (T) and ring (R), along with the sleeve (S), are used in two-conductor (TS), three-conductor (TRS) and four-conductor (TRRS) variations. This terminology originated from the early days of telephones when operators manually plugged lines into a manual switchboard. Today, there are myriad audio applications that use two conductors (TS) for mono and three conductors (TRS) for stereo. See phone connector and mini-phone connector. 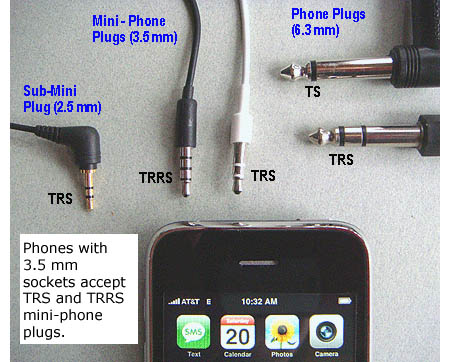 Cellphones typically use sub-mini and mini-phone jacks for the headset. For example, this iPhone accepts a TRS music headset for stereo playback as well as a TRRS telephone headset, which uses the fourth line for the microphone and phone control (answer/end call). Phone, mini-phone and sub-mini connectors are used in myriad devices, primarily for audio applications (see phone connector and mini-phone connector).

Tip and ring dates back to the late 19th century such as when this PBX was switching calls for only lawyers in Richmond, Virginia. In order to find out if an extension was in use, the operator touched the tip of the plug to the outer ring of the extension socket on the board. Known as "tipping," if static was heard, the line was busy. (Image courtesy of AT&T.)