The computer performs all processing by "calculating," "comparing" and "copying" the data read from storage and written into RAM (see storage vs. memory). Programs and data can also be stored anywhere in the world and come into RAM from the network. See computer.

Data are written to storage and read from storage in large blocks known as "sectors." After data are written into RAM, any single byte can be manipulated independently. This interplay is how computers process all data.

Calculate - Compute Amounts and Keep Track
A computer can add, subtract, multiply and divide numbers to compute money amounts and process myriad mathematical algorithms. The computer's calculating capability also enables it to keep track of its own internal iterations for all the tasks it performs.

Compare - Match One Set With Another
The computer can look at two sets of data and determine whether they are equal or which set is higher or lower in value. Comparing is performed for searching, analyzing and evaluating data for countless purposes.

Copy - From One Place to Another
The computer can rearrange data for organizing and reporting by copying data from one area in memory to another. In fact, in France and Spain, a computer is actually called an "organizer." Computers do an enormous amount of copying (see computers are copy machines). 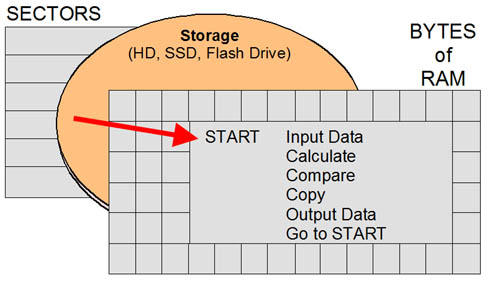 No processing can occur without first writing the program into RAM. This example is very conceptual because real instructions are contiguous, and there can be thousands of them. However, the checkerboard highlights RAM's "byte addressability," which allows each instruction to be extracted independently for analysis. See byte addressable and ALU. 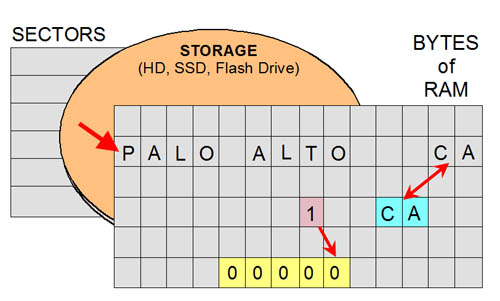 This example counts all California records in the database by comparing each one in RAM to "CA," which is a constant created in the program. If equal, a "1," also created in the program, is added to a group of bytes defined as a counter. Each record is written into the same RAM buffer and compared until the last record has been examined. 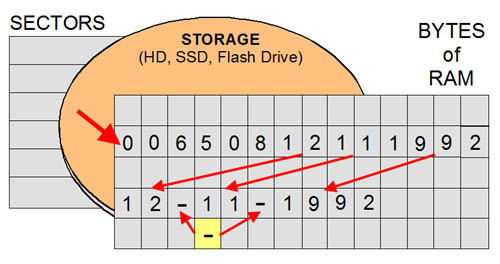 Data are stored as contiguous fields in a database but are rendered for humans by copying the characters into the desired order. Dashes are typically not stored as data. They are copied into the required format by the program (see picture). 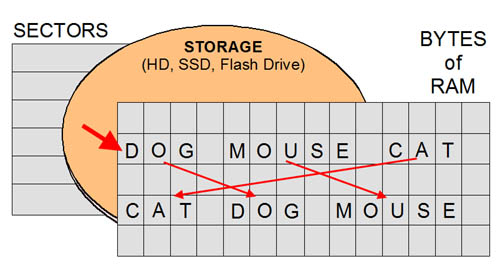 Resequencing data is accomplished by comparing each item with the others and copying it into the appropriate order. There is also significant calculating going on to keep track of what goes where. Data records are generally indexed, and instead of sorting the actual records, the much smaller indexes are sorted (see index). 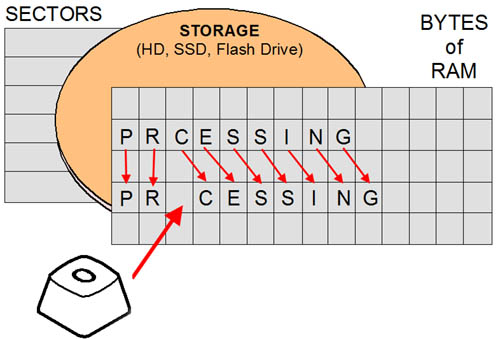 Part of word processing's magic is copying. In this example, in order to insert the "O" from the keyboard, the remaining characters are copied one byte to the right to make room. This illustration is very conceptual, with the actual process requiring many complex calculations of beginning and ending locations.