(1) An umbrella term for an automobile with advanced electronics. Microprocessors have been used in car engines since the late 1960s and have steadily increased in usage throughout the engine and drivetrain to improve stability, braking and general comfort. There can be a hundred or more microprocessors in a car today.

The 1990s brought enhancements such as GPS navigation, reverse sensing systems and night vision (able to visualize animals and people beyond normal human range). The 2000s added assisted parking, Web and email access, voice control, smart card activation instead of keys and systems that keep the vehicle a safe distance from cars and objects in its path. Of course, the ultimate smart car is the one that drives itself (see self-driving car). See automotive safety systems, embedded system, connected car and smart surface.

(2) (Smart Car) A mini-compact, two-seater automobile popular on crowded city streets in Europe since the late 1990s. It debuted in the U.S. in January 2008 by carmaker Smart USA. Designed to get 40 miles per gallon, the Smart Car is marketed for city driving.

With Smart standing for "Swatch Mercedes Art," the car began as a joint venture between Mercedes-Benz and watchmaker Swatch in the early 1990s. The prototype was exhibited at the Frankfurt Motor Show in Germany in 1997, and production began in 1998 in France. Swatch turned its share of the project over to Mercedes shortly after. See smart. 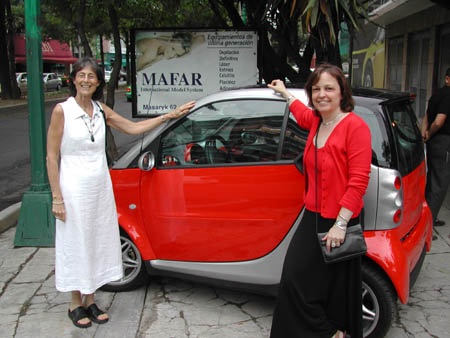 Weighing 1,800 pounds and three feet shorter than a Mini Cooper, some call the Smart Car a toy. However, its steel cage is similar in concept to a race car, and anti-lock brakes and front and side air bags are standard. This photo was taken in Barcelona.