A design feature that is carried forth from the original version of a product in order to make people feel comfortable with the new device. For example, the click sound on a digital camera comes from an audio clip; however, the original sound was the actual shutter opening and closing. Pronounced "skew-uh-morf." See flat UI.

From the Greek Words Skeuos and Morph
"Skeuos" and "morph" mean "tool" and "shape," and the term originally referred to adornments that came from earlier Greek structures. For example, a decorative carving on a new building might replicate a form on an ancient temple that was structural. 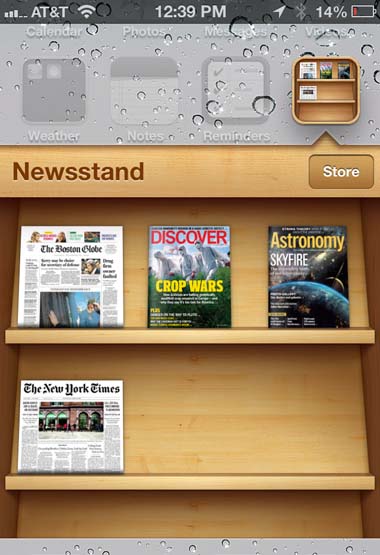 This iPhone wooden bookshelf motif was designed to use a familiar object to make people feel comfortable. Along with other skeuomorphs, it was eliminated in 2013 with iOS 7.

This Windows 8 Paint menu uses a 3.5" floppy disk icon for its Save functions. In computer years, the floppy is now ancient, having had a lifespan from the 1970s to the end of the 1990s. See floppy disk.