A device that converts video content to analog or digital TV signals. For years, the set-top box (STB) was the cable box that "sat on top" of the TV. Although no more flat surface to rest anything, the term lives on.

A satellite TV set-top box is officially a "satellite receiver," and the box that converts over-the-air digital broadcasts to analog for old TVs is a "converter" (see TV converter box).

Apple TV, Fire TV, Android TV and Roku boxes connect to the home network for Internet access and convert video from Netflix, Hulu and other providers into TV signals. These "media hubs" go by many names and may accept local content from the home network as well (see digital media hub).

Many cable TV companies also offer Internet service, but their set-top boxes are only for TV. The cable coming into the house is split into two lines: one to the set-top box and the other to the cable modem for Internet access. See MPEG, DVR, CableCARD, cable modem and hybrid set-top box.

For years, people placed cable boxes on top of their CRT or projection TV sets because there was plenty of room.

The Motorola unit (top) connects to the cable company's coaxial cable, whereas the Apple TV (only four inches wide) gets its content via Ethernet or Wi-Fi. 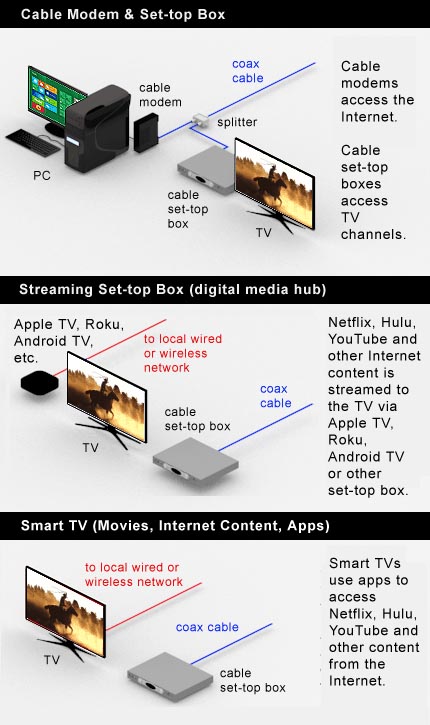 In practice, today's streaming set-top boxes are often hidden in the A/V cabinet and nothing much to look at. These three plug into the A/V receiver via HDMI and connect to the home network via the Ethernet switch.

Older set-top boxes such as this Roku unit had analog outputs to accommodate legacy TVs. However, HDMI has pretty much replaced this variety of connectivity (see HDMI).