A self-contained computer system specialized for network use. Its applications are pre-installed, and access to setup and configuration is via a Web browser. Also called a "micro server," a server appliance may provide a single application or several such as file server, Web server, mail server and firewall.

Plug In and Go
Server appliances are designed to be plugged into the network and configured, loaded with files and begin working immediately with limited or no technical support, at least for a power user or experienced network administrator. The appliance may also include a RAID-based disk system and redundant power supplies to provide an increased level of fault tolerance.

The router is often considered the first server appliance, because it plugs into the network and performs the single function of packet forwarding. However, routers come in many sizes and complexities, the larger ones requiring significant technical expertise and detailed knowledge of the network. See Internet appliance. 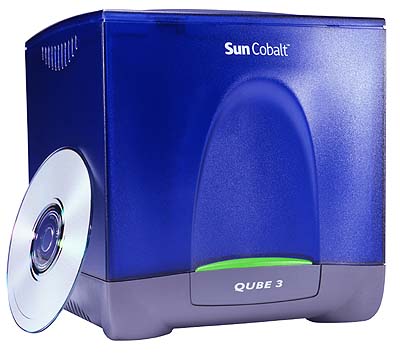 One of the first server appliances, the 8" Qube from Sun was used for public websites and intranets. It included Web and mail servers, discussion groups, firewall, document indexing and HTML editing. (Image courtesy of Sun Microsystems, Inc.)