A socket that connects to a serial interface (one bit following another over one line). Serial ports are widely used by sensors for data acquisition, and they were standard on early computers for connecting a modem, mouse and other peripherals. Old Macintoshes used the serial port for printers. Also known as an RS-232 port, serial ports provide very slow speeds and have been superseded by USB on desktop computers. USB-to-serial adapters are available for old peripherals.

Serial, Parallel and Game
Early PCs were fitted with one or two serial ports, one parallel port and one game port on the motherboard. On the first PCs, the ports were contained on a stand-alone expansion card plugged into the ISA bus. Contrast with parallel port. See serial interface and RS-232. 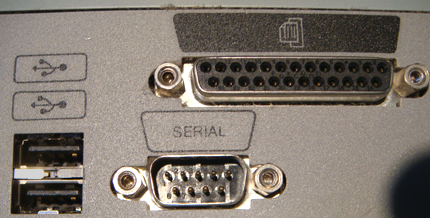 As USB ports (left) began to proliferate, the serial and parallel ports (right) were included for a while, but eventually gave way entirely to USB.