An electronic component that resists the flow of current in an electronic circuit. Resistors are often made out of chunks of carbon or thin films of carbon or other resistive materials. They can also be made of wires wound around a cylinder. The common resistor is a two-wire package with a fixed resistance measured in ohms; however, different types of resistors are adjustable by the circuit designer or the user (see variable resistor).

There are a wide variety of resistors in use. The chip in the center is a reminder that resistive elements are also used in integrated circuits.

Axial resistors are discrete components with wire leads that are soldered to other components or to the circuit board. This type of resistor is easily identified by its color bands, which indicate its resistance and tolerance (see example below). 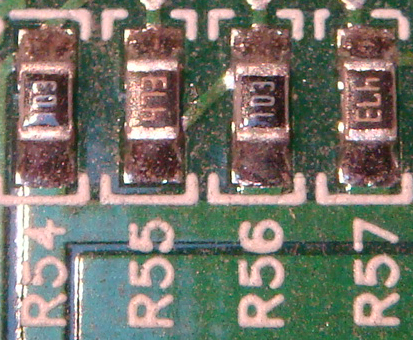 Surface mount resistors are soldered on top of the circuit board and are identified by number rather than color bands.