(Redundant Array of Independent Disks) A disk or solid state drive (SSD) subsystem that increases performance or provides fault tolerance or both. RAID uses two or more physical drives and a RAID controller, which is plugged into motherboards that do not have RAID circuits. Today, most motherboards have built-in RAID but not necessarily every RAID configuration (see below). In the past, RAID was also accomplished by software only but was much slower. In the late 1980s, the "I" in RAID stood for "inexpensive" but was later changed to "independent."

In large storage area networks (SANs), floor-standing RAID units are common with terabytes of storage and huge amounts of cache memory. RAID is also used in desktop computers by gamers for speed and by business users for reliability. Following are the various RAID configurations. See NAS, SAN and Storage Spaces.

RAID 0 - Striping for Performance (Popular)
Widely used for gaming, striping interleaves data across multiple drives for performance. However, there are no safeguards against failure. See RAID 0.

RAID 3 - Speed and Fault Tolerance
Data are striped across three or more drives for performance, and parity is computed for safety. Similar to RAID 3, RAID 4 uses block level striping but is not as popular. See RAID 3 and RAID parity.

RAID 5 - Speed and Fault Tolerance (Popular)
Data are striped across three or more drives for performance, and parity is computed for safety. RAID 5 is similar to RAID 3, except that the parity is distributed to all drives. RAID 6 offers more reliability than RAID 5 by performing more parity computations. For more details, see RAID 5.

EMC has been a leader in high-end RAID systems for years with systems storing multiple terabytes of data. (Image courtesy of EMC Corporation.) 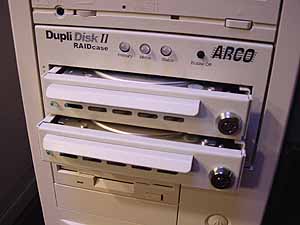 Arco was first to provide RAID 1 on IDE disk drives rather than SCSI. This two-drive unit connected to the motherboard with one cable like a single drive. (Image courtesy of Arco Computer Products, Inc., www.arcoide.com)