A stereoscopic 3D display technology that separates the stereo frames by RGB colors. Dating back more than a hundred years, the anaglyph method has been used for photographs, a handful of films in theaters and 3D comic books. Anaglyph images can also be downloaded from the Web or created in the computer.

The stereo frames are created with color filters in an anaglyph camera or by passing the original 2D frames through a 2D-to-3D converter. The corresponding filters in the viewer's eyeglasses direct the left image to the left eye and the right image to the right eye. The most common glasses have a red left lens and cyan right lens. The red lens filters out the red, and the cyan lens filters out the blue and green. Red/green and red/blue colors are also used (see RGB).

For Every Distribution Method
The advantage of anaglyph is that stills and movies can be viewed on any computer or TV, and it is also the only stereoscopic 3D technology that can be printed in a magazine or used to print photographs. Although lenticular printing can create a 3D-like effect for still photos, the printing must be done on a thermoplastic layer (see lenticular printing). See 3D visualization, polarized 3D, active 3D and 3D glasses.

The June 2010 issue of Playboy included a pair of anaglyph glasses (top) and a 3D ad for the True Blood TV series. This image was excerpted from the 3D centerfold, because it clearly shows how anaglyph colors look when printed.

ArcSoft's Media Converter turned this 2D photo into 3D, and red/cyan glasses must be used to view it. 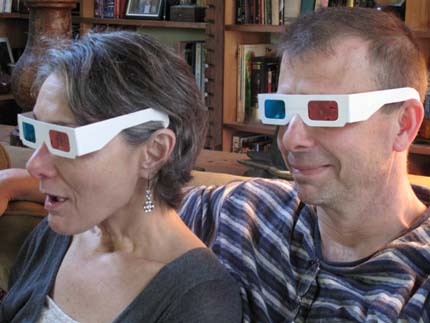 A variety of 3D movies on DVD are available in anaglyph formats. 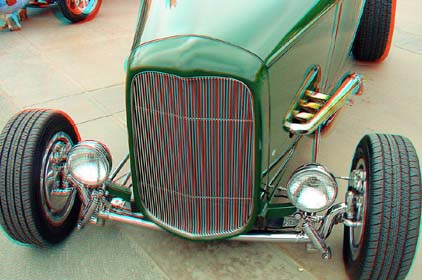 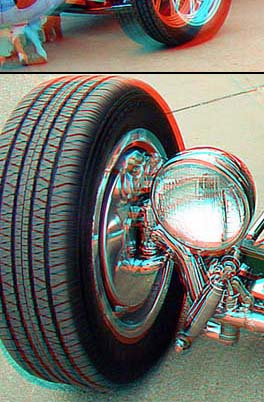