(Radio Frequency IDentification) A data collection technology that uses electronic tags for storing data. The tag, also known as an "electronic label," "transponder" or "code plate," is made up of an RFID chip attached to an antenna. Transmitting in the kilohertz, megahertz and gigahertz ranges, tags may be battery-powered or derive their power from the RF waves coming from the reader.

Like barcodes, RFID tags identify items. However, unlike barcodes, which must be in close proximity and line of sight to the scanner for reading, RFID tags do not require line of sight and can be embedded within packages. Depending on the type of tag and application, they can be read at a varying range of distances. In addition, RFID-tagged cartons rolling on a conveyer belt can be read many times faster than bar-coded boxes.

Serialization - A Major Factor
RFID tags hold more data than barcodes, but a major differentiator is the unique serial number in the RFID's Electronic Product Code (EPC) because it allows tracking of individual items. While a UPC barcode might identify a 16 oz. bottle of mayonnaise, an EPC RFID tag could identify that single bottle. In this case, item level tracking could determine if the food had passed its expiration date. See barcode, UPC and EPC.

Tracking livestock was one of the first uses of RFID, as well as vehicle and container tracking. RFID is also used to track people. In 2004, an amusement park in Denmark put RFID wrist bands on children, which could be quickly located by readers in the park if they were lost. RFID chips are even implanted into humans (see VeriChip).

Libraries use RFID tags to quickly check out books and videos, and employees merely wave their RFID badges by a reader rather than insert them into a slot. For entrance ways manned with security guards, RFID tags can trigger calls to a database that puts pictures of the badge holders on screen by the time they approach the gate. To prevent theft, retail stores tag their merchandise with a tag similar to RFID, but without the chip (see EAS).

Passive, Active and Semi Tags
"Passive" tags have no power source but use the electromagnetic waves from the reader to energize the chip and transmit back (backscatter) their data. Passive tags can cost less than a quarter and be read up to approximately 10 feet from the reader's antenna.

"Active" tags have a battery that can transmit up to 300 feet indoors and more than a thousand feet outdoors. Used for tracking trailers in yards and containers on the loading dock, active tags cost several dollars and may periodically transmit a signal for readers to pick up or may lie dormant until they sense the reader's signal.

"Semi-passive" tags, also called "semi-active" tags, combine passive backscattering with a battery that allows the device to beep, blink or perform some operation. For example, a semi-passive tag on refrigerated cartons can include a sensor that, when interrogated, reports the temperature range during shipment.

Reusable vs. One-Time
RFID tags for applications such as highway toll collection and container tracking are in continuous use for several years. Like regular electronic components, the tags are adhered to rigid substrates and packaged in plastic enclosures. In contrast, tags on shipping cartons are used for a much shorter time and are then destroyed. Disposable tags are adhered to printed, flexible labels pasted onto the carton, and these "smart labels" contain an RFID chip and antenna on the back. A thermal printer/encoder prints alphanumeric and barcode data on the labels while encoding the chip at the same time. See RFID tag.

RFID Goes Way Back
Although first used in World War II to identify friendly aircraft, RFID technology really materialized in the 1980s and began to reach the masses in the 1990s. In 1993, the E-ZPass highway toll system was launched in the Northeast. In 1996, General Motors introduced OnStar, which is satellite-based RFID. A year later, Mobil's Speedpass let people wave a keychain tag at the gas pump to pay by credit card. After the turn of the century, RFID began to proliferate.

NFC - An RFID Technology
Whereas readers can activate RFID tags over distances measured in meters, near field communication (NFC) is an RFID technology with a range of only a couple inches (see NFC).

When Tags Are Dirt Cheap
If tag prices ever cost only a penny or two, pundits have suggested RFID will take off in areas such as reading a supermarket cart full of groceries, a washer/dryer that reads clothing tags and a refrigerator that creates a shopping list. See RFID tag, RFID reader, RFID printer, EPC, Gen 2 and tag singulation. 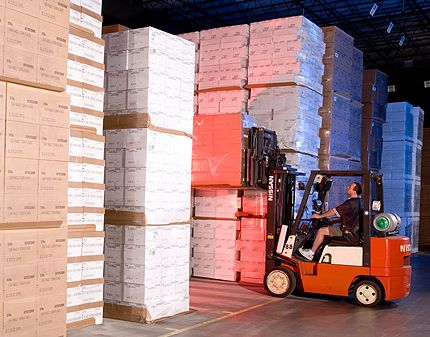 The unique serial number in the electronic product code (EPC) lets RFID readers scan all the cases in a pallet without having to break it down. This provides a huge cost savings in warehouse management and is the reason why Wal-Mart required its suppliers to begin using RFID in 2005. (Image courtesy of Intermec Technologies, www.intermec.com) 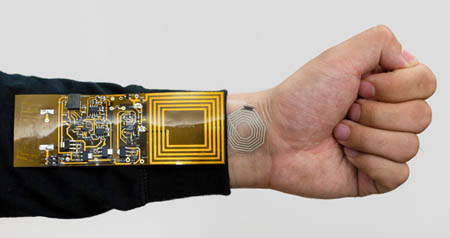 A unique RFID application, in 2019, Stanford University developed a stretchable RFID sticker that adheres to the skin and monitors a person's respiration and pulse. Temperature and sweat detection is also planned. A receiver clipped to clothing sends out a small amount of energy that causes the sticker to emit back the data that are periodically transferred to a smartphone via Bluetooth. (Image courtesy of Bao Lab, Stanford University.)