A future storage technology from IBM that moves magnetically-stored data electronically. It comprises millions of U-shaped wires perpendicularly placed on a silicon substrate with the read/write heads located at the bottom of the U. The wires are less than one micron in diameter. Approximately 100 bits of data are magnetically written onto each wire and are moved up and down the wire by applying a positive or negative pulse at one end.

The bits move at more than 300 feet per second, which is considerably faster than the spinning platters of modern-day hard disks.

From RACE to Racetrack
The potential capacity and speed of racetrack memory dwarfs the specifications of even the most advanced hard disks. If racetrack memory ever becomes a commercial product, the comparison to the first Race-named storage device will be even more staggering. In the 1960s, RCA introduced Random Access Card Equipment (RACE), a storage device that moved 4x18" magnetic cards around a raceway (see RACE). 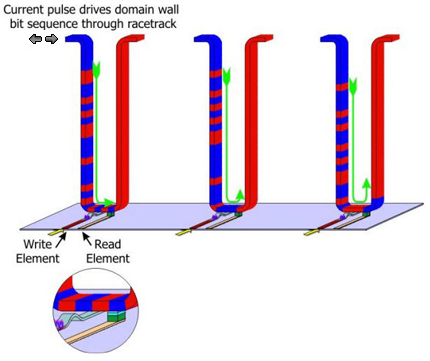 Positive and negative current applied to one end of the racetrack moves the magnetic domains up and down the wire (the racetrack). (Image courtesy of IBM Almaden Research Center, www.almaden.ibm.com)