For Email
A total aside from crypto, in order to impede spammers, a variation of PoW has been proposed for email. For example, if email programs had to solve a puzzle that took just 15 seconds before sending each message, a compromised computer could never be used to unleash hundreds of thousands of messages.

For Cryptocurrencies
A very controversial subject in the crypto world, proof-of-work uses massive amounts of electricity, which is why Ethereum moved from proof-of-work to proof-of-stake (see Ethereum 2.0).

How PoW Works
The header of the last block is combined mathematically with a random number, known as "hashing," to derive a result that matches some criterion such as the first 20 bits must be zero. When the desired result is reached due to continually incrementing the random number and trying again, it proves that a certain amount of computer processing was undertaken. It can take hours, days or weeks of hashing to find the number that proves the challenge, and specialized mining hardware is rated in trillions of hashes per second (see hash rate, miner hardware and cryptographic hash function).

Proof-of-Stake (PoS) Algorithm
In contrast, the proof-of-stake (PoS) method differs entirely. PoS miners compete to confirm transactions based on how much crypto they have locked up and held ("staked") for this purpose, and randomness also plays a part. Compared to proof-of-work, proof-of-stake uses only a fraction of the electricity.

In addition, proof-of-work (PoW) miners can become monopolistic, and any single miner with 51% or more of the network's computing power could invalidate good transactions and double spend the coins. With proof-of-stake (PoS), any miner with that much "at stake" would not want to destabilize the system. 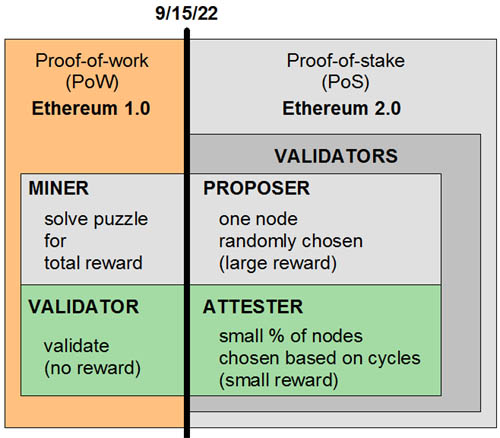 In September 2022, Ethereum switched from proof-of-work to proof-of-stake (see Ethereum 2.0).