A storage technology that makes indentations 10 nanometers in diameter in a plastic film. Each indentation is a bit, which can be heated back to its original shape. Driven by MEMS motors and all built into a chip, thousands of tiny probes, similar to the tips on an atomic force microscope, move back and forth a minute distance over the film. Because of its many feet, IBM's code name for its probe storage technology is "Millipede." Probe storage is expected to use no more power than a flash memory card, but store up to 100 times as many bits as traditional disk storage. See AFM. 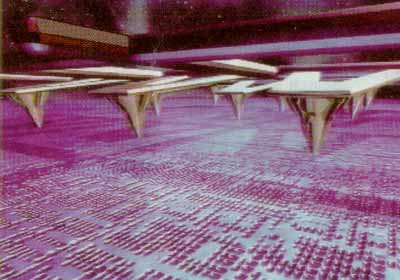 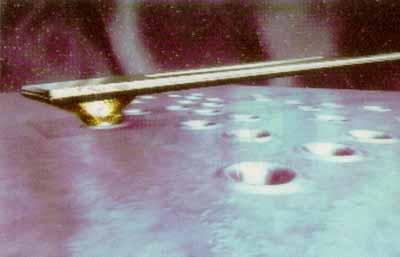 Looking like a bunch of old phonograph needles on top of a page of Braille, the bumps on IBM's probe storage are actually tiny indentations that have been "punched" into the plastic material. Introduced in 2002, IBM said that some day it expects as many as 25 million pages of text will be stored in an area no larger than a postage stamp. (Images courtesy of IBM.)