(2) (PIX [picture] ELement) The fundamental display element of an electronic screen or bitmapped image. Screen resolution is rated by the number of horizontal and vertical pixels; for example, 1024x768 means 1,024 pixels are displayed in each row, and there are 768 rows (lines). Likewise, bitmapped images are sized in pixels: a 350x250 image has 350 pixels across and 250 down.

Pixels and Subpixels
In monochrome systems, the pixel is the smallest addressable unit. With color systems, each pixel contains red, green and blue subpixels, and the subpixel is the smallest addressable unit for the screen's electronic circuits. The software addresses the pixel, and the hardware addresses the subpixels that make up the pixel. For more on the red, green, blue concept, see RGB.

Pixel Structures
In storage, pixels are made up of one or more bits. The greater this "color depth" or "bit depth," the more shades or colors can be represented. The most economical system is monochrome, which uses one bit per pixel (on/off). Gray scale and color typically use from four to 24 bits per pixel, providing from 16 to 16 million colors. See color depth.

Displaying the Pixel
On a display screen, pixels are either phosphor or liquid crystal elements. For monochrome, the element is either energized fully or not. For gray scale, the pixel is energized with different intensities, creating a range from light to dark. For color displays, the red, green and blue subpixels are each energized to a particular intensity, and the combination of the three-color intensities creates the perceived color to the eye. For subpixel details in an LCD screen, see LCD subpixels. See screen resolution, vertex shader, voxel and bad pixel.

The simplest pixel representation is a black and white monochrome image in which one bit represents one pixel. Monochrome CRTs use white, green or amber phosphors as a single color over a gray/black screen background. 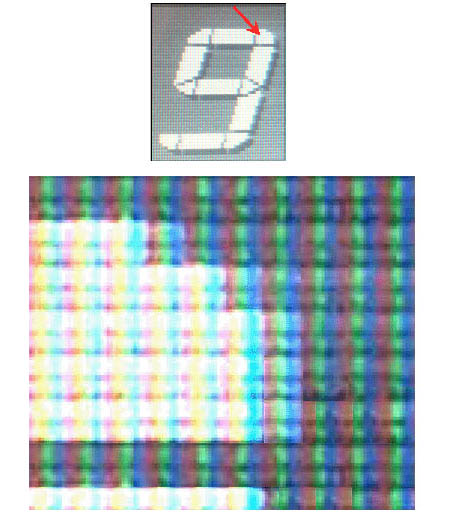