A metal or plastic cryptocurrency coin. A variety of physical bitcoins and other crypto coins are created for amusement as well as for collectors. The metal varieties are made of copper, brass and even silver and gold, in which case their value depends primarily on the price of the precious metal. For fun, people create their own crypto coins on a 3D printer. See crypto coin.

Casascius - The First Physical Bitcoin
A year after Bitcoin launched, Utah-based Mike Caldwell began minting the Casascius coin, which served as a cold crypto wallet for bitcoins. It was a brass coin into which the private key of the bitcoin was stored. Bitcoin bars were also minted. At the time, bitcoins were worth about $30, and various BTC amounts were purchased with their keys stored in each coin. Within a couple years, the U.S. government shut Caldwell down because it is illegal to mint currency. The C-a-s-a-s in Casascius means "call a spade a spade." See cold wallet. 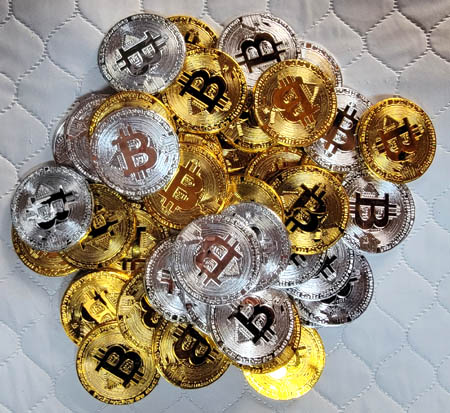 A huge variety of physical crypto is available on Amazon such as this Guass-branded bundle of 50 plastic bitcoins for $9.95. (Image courtesy of Amazon.com.)