A device that detects light. Used for photographic light meters, automatic on-at-dusk street lights and other light-sensitive applications, a photocell varies its resistance between its two terminals based on the amount of photons (light) it receives. Also called a "photodetector," "photoresistor" and "light dependent resistor" (LDR).

The photocell's semiconductor material is typically cadmium sulfide (CdS), but other elements are also used. Photocells and photodiodes are used for similar applications; however, the photocell passes current bi-directionally, whereas the photodiode is unidirectional. See photodiode. 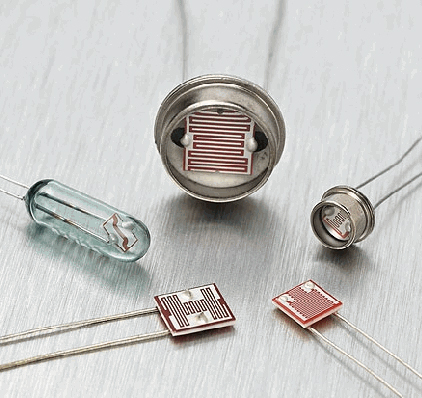 Photocells come in a variety of packages such as this assortment from PerkinElmer. As the photocell receives more photons, the resistance is lowered between the two terminals. (Image courtesy of PerkinElmer, Inc., www.perkinelmer.com)