A computer cooling method that uses the same liquid-to-gas-to-liquid cycle as a refrigerator or freezer, but with different coolants and construction. A compressor and condenser turn gas into liquid, and an evaporator converts it back into gas, while absorbing heat from the CPU chip and other components. Phase change cooling creates subzero temperatures as low as -100 degrees Centigrade, but the humidity created by condensation is a side effect that has to be dealt with.

Overclocking and Supercomputers
Phase change cooling has typically been used by enthusiasts who bump up the CPU clock speed to push their computers to the limit. However, in 2008, supercomputer builder Cray Inc. introduced its ECOphlex (PHase-change Liquid EXchange) system for its XT5 series with a unique method for eliminating water condensation and leakage. In addition, whereas refrigeration systems normally expel heat, the air leaving an ECOphlex system is nearly the same temperature as the air entering it. See CPU cooler. 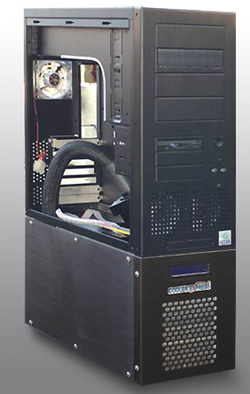 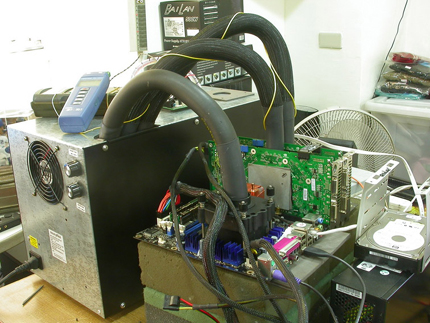 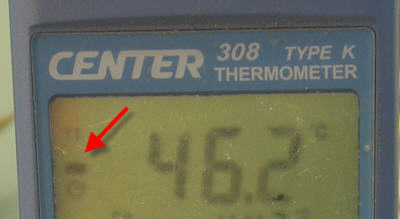 At top, this Cooler Express phase change unit sits comfortably underneath a tower case. Below the tower image is the same unit with motherboard and drives exposed. Diehards forgo the case for even greater cooling and fast component replacement. The red arrow on the thermometer points to the minus sign (-46.2 Centigrade). (Images courtesy of Cooler Express International Technology Co.)