The science of developing materials at the atomic and molecular level in order to imbue them with special electrical and chemical properties. Nanotechnology, which deals with devices typically less than 100 nanometers in size, is making a significant contribution to the fields of computer storage, semiconductors, biotechnology, manufacturing and energy.

In the future, amazing nanotech-based products are expected, including extraordinarily tiny computers that are very powerful, building materials that withstand earthquakes, advanced systems for drug delivery and custom-tailored pharmaceuticals as well as the elimination of invasive surgery, because repairs can be made from within the body.

One Person Can Make a Breakthrough
Larry Bock, CEO of Nanosys, who helped launch more than a dozen successful biotech companies in his career, said that nanotech will impact even more industries than biotech. In an excerpted article from the March 2003 Nanotech Report, he compared nanotechnology with microelectronics. Bock said that "a single chemistry graduate student can create novel devices and device architectures not even imaginable or manufacturable by today's biggest microprocessor companies. That is because these devices are fabricated chemically, or from the bottom up. Existing microelectronics technology is fabricated by etching wafers, or from the top down." See AFM, STM, Buckyball, nanotube and MEMS. 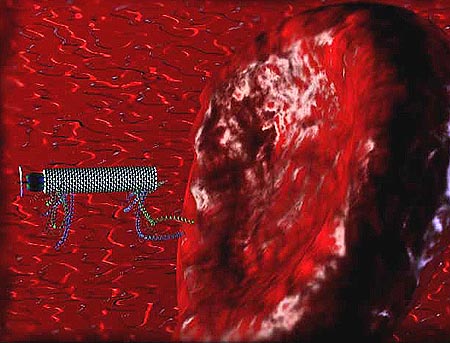 By 2020, scientists at Rutgers University believe that nano-sized robots will be injected into the bloodstream and administer a drug directly to an infected cell. This robot has a carbon nanotube body, a biomolecular motor that propels it and peptide limbs to orient itself. Because it is composed of biological elements such as DNA and proteins, it will be easily removed from the body. (Image courtesy of the Bio-Nano Robotics team at Rutgers University: Constantinos Mavroidis, Martin L. Yarmush, Atul Dubey, Angela Thornton, Kevin Nikitczuk, Silvina Tomassone, Fotios Papadimitrakopoulos and Bernie Yurke.)