A transparent, plastic film or liquid that covers the screens of smartphones, tablets and laptops to protect them from scratches and damage. With ultra-thin laptops, the keyboard can press against the closed lid, leaving permanent marks on the screen. In such cases, a piece of leather or soft cloth can be placed over the keyboard before closing.

The first protectors were a thin, inexpensive self-adhesive film made from polyethylene terephthalate (PET). They provided a high level of scratch resistance but little impact protection. Some manufacturers sold PET sheets that users cut themselves to fit their phones, but most were sold pre-cut to specific phone models.

The next advancement was thermoplastic polyurethane (TPU), which offered greater impact protection. Although TPU would absorb low-level impacts, its gel-like feel increased the resistance users felt when moving their finger across the screen. Sometimes an impact would dent the protector, but it was elastic enough to regain its shape over time.

Tempered Glass
Tempered glass was the first major improvement. Although initially expensive, it provided high-level impact and scratch protection without compromising on the feel of the screen. Custom cuts are mandatory; however, the protection varies with the quality of the glass.

Liquid Glass
Liquid screen protection (LSP) is unique. Rather than creating a new layer on top of the screen, LSP strengthens the screen itself. A silicon dioxide solution suspended in alcohol is wiped onto the screen surface by the end user. As the alcohol evaporates, the silicon dioxide sinks into the pores and imperfections in the glass. Over the next 24 hours, the silicon dioxide permanently bonds with the glass leaving a flatter, stronger surface. Providing as much or even a bit more protection than tempered glass, it does not change the aesthetics of the device. 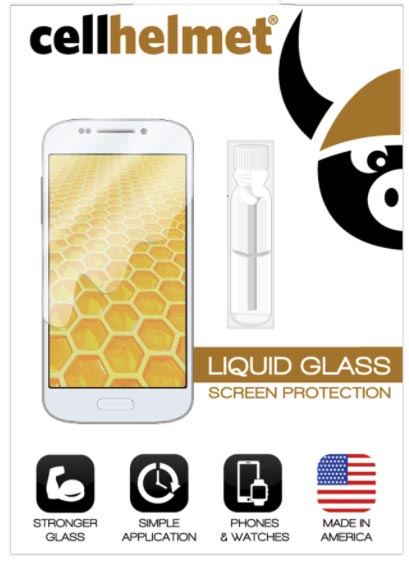 Cellhelmet is a nano-liquid that is spread evenly over the device's screen. After the liquid dries and cures, the glass is strengthened at the molecular level. (Image courtesy of Cellhelmet, www.cellhelmet.com)