(LIght Detection And Ranging) An optical technology that is used to sense the shape, motion and makeup of objects in the environment. LIDAR is used in a wide variety of disciplines, including airborne mapping, measuring atmospheric conditions and self-driving cars. LIDAR works by pulsing laser signals using all light ranges (ultraviolet, visible, infrared) and amplifying the light that is scattered back through an optical telescope and photomultiplier tube. A 3D map is generated of the surroundings. Sometimes called "laser radar," LIDAR uses light waves and not "radio" waves. See self-driving car.

LIDAR vs. Radar
In today's cars with advanced safety systems, radar may be used to determine the distance to the next vehicle on the road, and LIDAR can also be used for this purpose. However, because LIDAR emits nanometer waves rather than radar's millimeter waves, LIDAR provides greater granularity. The computer can analyze the returning LIDAR signals and differentiate between objects such as a pedestrian, bicycle or deer and make a decision accordingly. See radar.

LIDAR in the iPhone
For improved photos in 2020, the iPhone 12 Pro models added a LIDAR sensor to better sense the depth of the image. See iPhone 12.

LIDAR can be used to sense objects in front, back and on the sides of a vehicle. (Image courtesy of Phantom Intelligence, www.phantomintelligence.com) 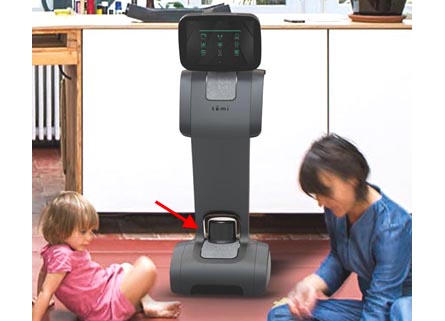 The LIDAR module (red arrow) on the Temi personal robot is used to detect objects as it moves around the house. (Image courtesy of Temi, www.robotemi.com)