A semiconductor-based laser used to generate analog signals or digital pulses for transmission through optical fibers. Both laser diodes and LEDs (light-emitting diodes) are used for this purpose, but the laser diode generates a smaller beam that is easier to couple with the smaller core of singlemode fibers. Laser diodes are designed to emit light either from their edge or their surface, the latter providing a circular beam that couples better with the round core of the fiber.

Laser diodes work on the same principle as the bigger gas lasers. They function as an optical oscillator by stimulating a chain reaction of photon emission inside a tiny chamber. In edge-emitting lasers, the semiconductor waver is cleaved, and the inherent properties of the semiconductor create reflective ends that may or may not be enhanced with additional reflective films. With vertical cavity surface emitting lasers (VCSELs), the reflectivity has to be added.

Laser diodes such as these are all fabricated using semiconductor processes just like CPU and memory chips. Note that the VCSELs (vixels) produce a circular beam that couples well with a fiber. 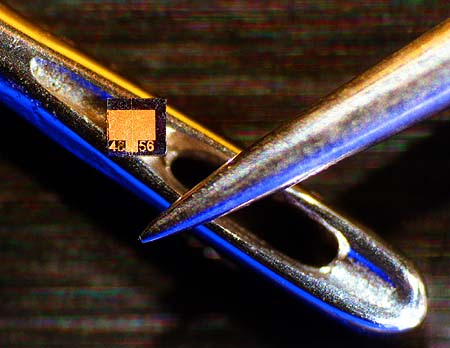 Laser diodes also make great sensors. This laser diode from Jet Propulsion Labs is tunable to different frequencies in order to detect various gases both on this and other planets. (Image courtesy of JPL's Microdevices Laboratory; Robert M. Brown, photographer)