A punch-card data entry machine. A deck of blank cards was placed into a hopper, and, upon operator command, the machine fed one card to a punch station. As characters were typed, a series of dies at the punch station punched the appropriate holes in the selected card column.

This is the type of IBM keypunch machine used in the 1960s and 1970s. Operators by the tens of thousands would spend a full shift keypunching orders, time cards and a host of other transactions. (Image courtesy of IBM.) 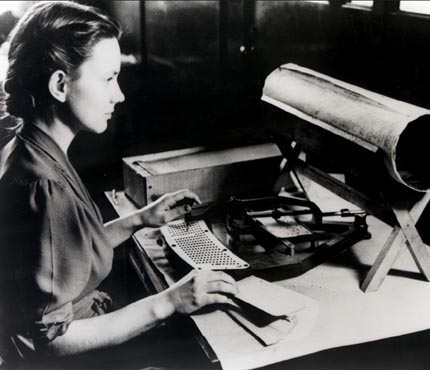 Throughout the 1890s, data for 60 million Americans was punched into Hollerith cards from information recorded by census takers. The cards were then "automatically" counted. See Hollerith machine for more details. (Image courtesy of IBM.)