A high-level programming language translator that translates and runs the program at the same time. It converts one program statement into machine language, executes it, and then proceeds to the next statement. This differs from regular executable programs that are presented to the computer as binary-coded instructions. Interpreted programs remain in the source language the programmer wrote in, which is human readable text.

Slower, But Easier to Test
Interpreted programs run slower than their compiler counterparts. Whereas the compiler translates the entire program before it is run, interpreters translate a line at a time while the program is being run. However, it is very convenient to write an interpreted program, since a single line of code can be tested interactively.

Some languages can be both interpreted and compiled, in which case a program may be developed with the interpreter for ease of testing and debugging and later compiled for production use. See JIT compilation.

Intermediate Languages - Compiled and Interpreted
Languages such as Java and Visual Basic are compiled into an intermediate bytecode language that still requires a runtime module (see illustration below). See Java and Java virtual machine. 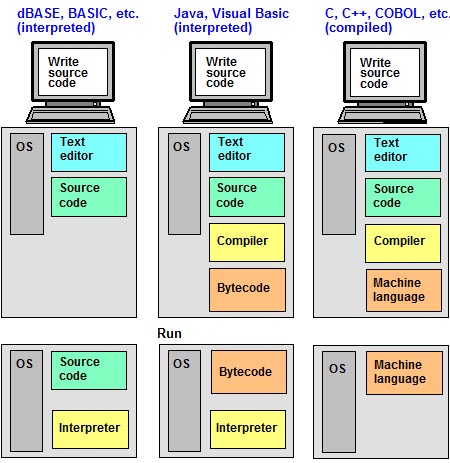