A replaceable unit that holds the ink and print nozzles for inkjet printers. A separate cartridge for each of the four CMYK colors is the most efficient. Low-cost printers include cyan, magenta and yellow inks in one cartridge, requiring the entire unit be replaced when one color is empty. The least efficient is a single cartridge that contains all four colors.

More Than Four Cartridges
Although the four CMYK inks are the standard for color printing, inkjet manufacturers have added inks of varying colors, claiming an improvement in the overall result. First in higher-end printers, six- and eight-cartridge printers followed in consumer models after the turn of the century. See ink coverage. 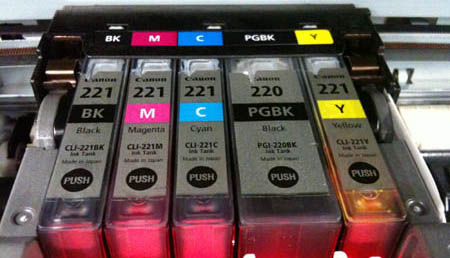 ColorSpan's inkjets have been used in sign shops and commercial printers. This Giclee model employs standard cartridges tethered to larger reservoirs via the tubes which are visible in this image. ColorSpan was acquired by HP in 2007. (Image courtesy of ColorSpan Corporation.)