The last iPod model from Apple. The iPod touch is like a small-screen iPhone, but without cellular service. Internet access is via Wi-Fi. Introduced in 2007 with only a headphone jack and 32GB of storage, a speaker was later added and storage increased to 256GB. The iPod touch was discontinued in 2022. See iPod versions, iPod and iPhone .

An iPhone Without the Phone
In 2008, Version 2.0 of the OS turned the touch into a mobile computer like the iPhone (see Apple App Store). Except for cellular phone calls, most things people do on an iPhone can be done on the touch. However, the screen is only 4" compared to the 4.7" iPhone SE, the smallest iPhone still sold. See iPod versions. 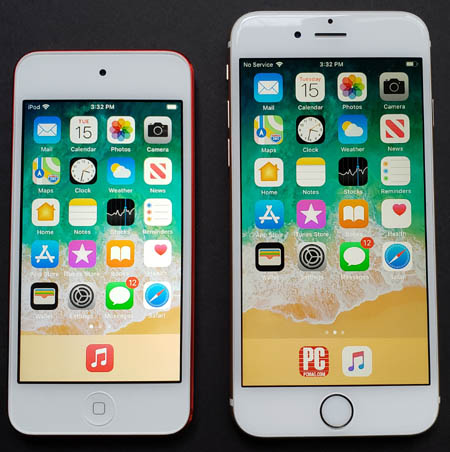 The iPod touch (left) does everything the iPhone (right) does except make cellphone calls. Except for the smartwatch, the 4" screen on the touch is Apple's smallest display.

Starting with the 4G touch in 2010, FaceTime video calling was added. (Image courtesy of Apple Inc.)