The smallest and most basic iPod and the only iPod with no screen. Introduced in 2005, the shuffle was discontinued in 2017. Popular with runners and people on the go, units clipped directly onto a sleeve or pocket. Starting with the 3rd-generation model, the VoiceOver text-to-speech feature audibly announced the names of songs, artists and playlists. See iPod and iPod versions. 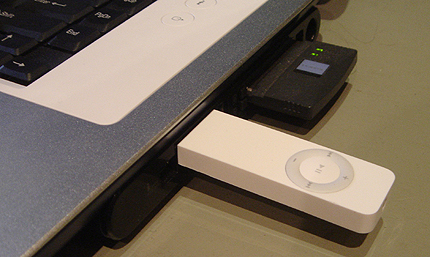 Plugging directly into the USB port, the first shuffle was "autofilled" with 240 random songs from an iTunes playlist. The next model was a small rectangle with a cable, but the 3rd-generation looked like a USB stick with controls on the earphones cord.

The last models of the shuffle (left) were square and thin. To the right of the shuffle are the nano and touch. The 5th-generation and last shuffle, introduced in 2012, held 480 songs in 2GB of flash memory. (Image courtesy of Apple Inc.)