(iPhone 10) An earlier flagship model of the iPhone. Introduced in 2017 along with the iPhone 8 and 8 Plus, the iPhone X has a 5.8" OLED screen. Its very small bezel causes the X to look very different than all previous iPhones, even the iPhone 8. Touch ID fingerprint recognition was replaced with Face ID, enabling a glance to unlock the device or check out with Apple Pay. 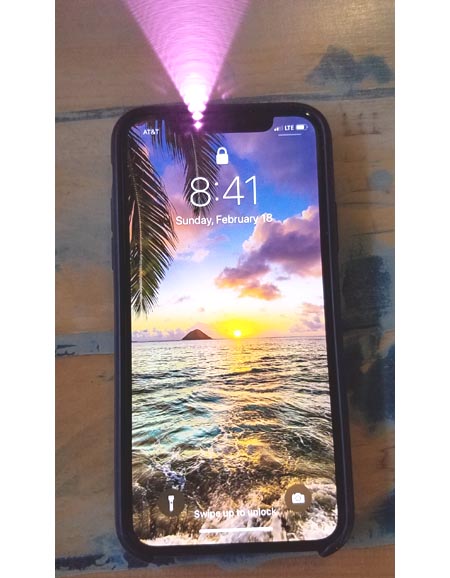 The front of the X is all screen, which turns on by moving it (Raise to Wake). Swiping up displays the home screen, and the Control Center is opened by swiping from the top right rather than the bottom. Touch ID gave way to facial recognition, and this photo shows the infrared scanning signals that unlock the phone. 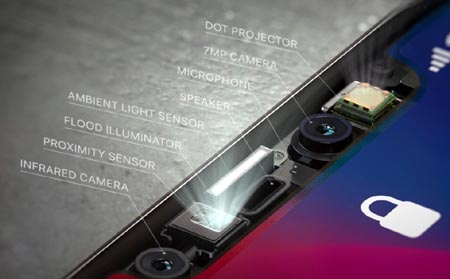 A small black band at top of the screen hides the microphone, speaker, camera and sensors. For facial recognition, the dot projector invisibly maps 30,000 dots on the user's face. The width of the X is actually smaller than the 8 Plus, but the screen is just as wide due to the smaller bezel. (Images courtesy of Apple Inc.) 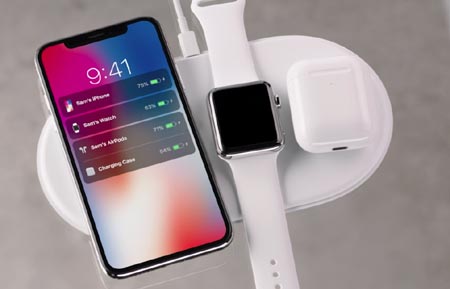 The X supports wireless charging, and Apple's AirPower mat can charge several devices at the same time. The AirPod case is on the right. (Image courtesy of Apple Inc.)