Apple's most advanced tablet family. Introduced in 2015 with a 12.9" Retina Display screen and up to 128GB of storage. The Pro is faster than previous iPad models and rivals Apple's own laptop computers (see MacBook). Its four speakers boosted tablet volume significantly.

In 2016, a smaller 9.7" Pro featured a True Tone screen that adjusts automatically to the ambient light. Live Photos was also added, and storage was increased to 256GB for both models.

Features of Current Pro Models
In 2018, an 11" model was added, and both 11" and 12.9" Pros switched from the Lightning connector to USB Type-C for charging and data transfer. The Home button and fingerprint scanner were replaced with gestures and facial recognition (see Touch ID and Face ID), and a new Smart Keyboard became an option (integrated cover and keyboard).

In 2020, along with greater performance, the camera was improved, and a LIDAR scanner was added for more realistic augmented reality (AR). See Apple Pencil, Live Photos, iPad and iOS versions. 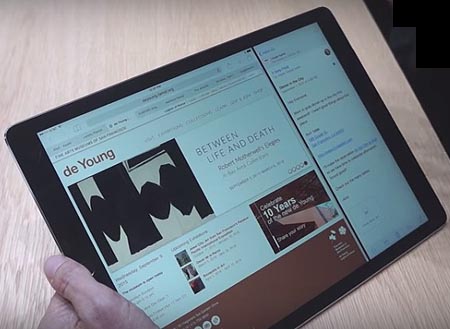 In 2015, the Pro debuted as Apple's largest tablet. (Image courtesy of PCMag.com.)