An earlier tape recording method that used a spinning read/write head and diagonal tracks. Although it used a rather complex transport mechanism, it was very gentle on the tape. After the cassette was inserted into the drive, the tape was pulled out and wrapped around the read/write head. While the head rotated as much as 30 meters per second, the tape traveled as little as 1 inch per second (ips), compared to linear technologies where the tape travels at more than 100 ips.

Invented by Ampex in 1956, helical scan was the only method that was fast enough to record video in real time. Using two-inch tape and running at 15 ips, the going rate for tape recorders of the time, the rotating head created an effective rate of 1500 ips. The helical scan method was used in many different tape technologies, including VHS videotape, DV/MiniDV (camcorders), 4mm DAT, Exabyte's 8mm and Mammoth lines, Sony's AIT and StorageTek's Redwood.

The helical scan method used a rotating head and diagonal tracks, which allowed a slow-traveling tape to provide a very fast transfer rate. The tape was pulled out of the cartridge and wrapped around the read/write head.

There were numerous helical scan formats used for digital storage. 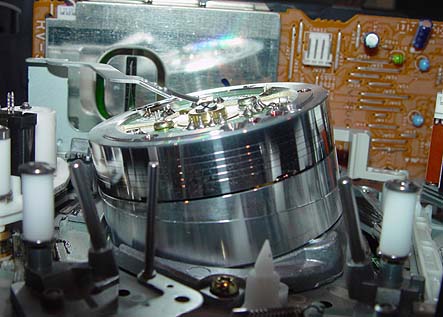 Notice the slant on this helical scan head from a VHS video recorder. This precise angle of the head was used to record and play back all helical scan formats.