A device used to maintain orientation with the earth. It is used in airplane and vehicle navigation systems as well as game controls such as the Wii from Nintendo. Smartphone and tablet gyroscopes detect changes in orientation from portrait to landscape.

A gyroscope contains three different-size rotating rings (gimbals) connected to each other at two points with the smaller, inner ring rotating around a spinning disc. While the speed of the spinning disc maintains its direction, the rings are free to move on their axes, and their movements are measured. For miniature solid state gyroscopes, see Coriolis vibrating gyroscope.

Gyroscope vs. Accelerometer
A gyroscope is used to establish the relationship of the device to the earth, whereas an "accelerometer" is used to measure the change of velocity in any direction. See accelerometer. 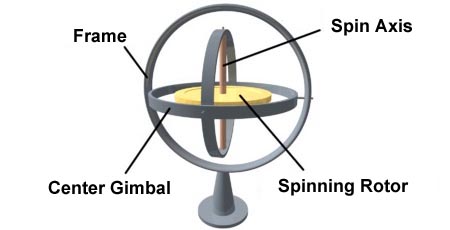 In this example, the rotating frame is the outer gimbal (third axis). The outer gimbal could also be attached to a stationary frame. (Image courtesy of Lucas Vieira Barbosa, www.1ucasvb.tumblr.com).