Commanding a computer, smartphone or tablet via a touchscreen or touchpad by using more than one finger. A multitouch display is sensitive to gestures, which are predefined motions that perform an action such as rotating an object.

Apple popularized multitouch in its iPhone and iPod touch, especially for zooming in and out of screen images, known as "pinch-to-zoom." Expanding a photo by sliding thumb and forefinger apart and pinching them together to restore the original size was greeted with delight when people first saw that feature.

Sensing Deflected Light
Most multitouch devices use capacitive screens that depend on a user's finger to draw current (see touchscreen). However, Microsoft's tablet top computer (see image below) and the large wall-mounted screens seen on TV use deflected light. For example, the CNN "Magic Wall" election map that enables journalists to track American political candidates state by state is a multitouch panel from Perceptive Pixel. These displays project images onto acrylic screens along with near-infrared or infrared light from one or more LED light sources. When fingers touch the screen, the light is deflected, and sensors pick up the changes. See touch scroll, Magic Mouse and gesture recognition. 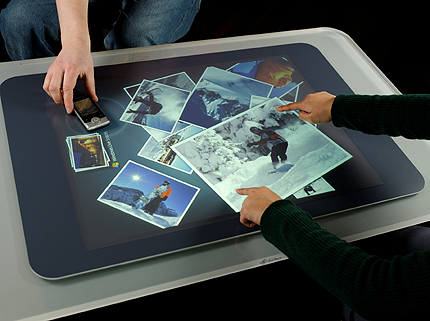 Introduced in 2008, Microsoft's multitouch Surface computer let people manipulate objects as if they were real. In this light table example, photos are moved around as if they were printed on paper and can also be resized at the same time. See PixelSense. (Image courtesy of Microsoft Corporation.)