A set of keyboard keys that are used to command the computer. Typically 12 keys labeled F1, F2, etc., their purpose is dependent on which operating system and application are running at the time they are pressed. Each key can be made to perform up to seven separate operations: the key pressed alone or with one or more of the Shift, Control and Alt keys held down at the same time. On the Mac, the Command and Option keys are the Control and Alt key counterparts. 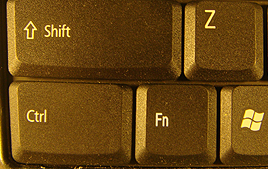