Any electronic system that uses a computer chip, but that is not a general-purpose workstation, desktop or laptop computer. Such systems use microcontrollers (MCUs) or microprocessors (MPUs), or they may use custom-designed chips. Deployed by the billions each year in myriad applications, the embedded systems market uses the lion's share of electronic components in the world.

All Kinds of Operating Systems
There are embedded versions of Linux, Windows and Mac, as well as other specialized operating systems. Embedded systems typically have limited storage, and an embedded OS is often designed to work in much less RAM than a desktop OS. They also typically work in real time. Small embedded systems may contain their own input/output routines and not require a separate operating system at all.

Programs Are in Firmware
In embedded systems, the software typically resides in firmware, such as a flash memory or read-only memory (ROM) chip, in contrast to a general-purpose computer that loads its programs into random access memory (RAM) each time.

In 1968, Volkswagen used a microprocessor to control the fuel injection, making it the first embedded system in a car. Thirty years later, the Volvo S80 featured 17 systems controlled by a computer (the list above). Today's cars can have a hundred or more CPUs, and the electronics cost more than the steel. 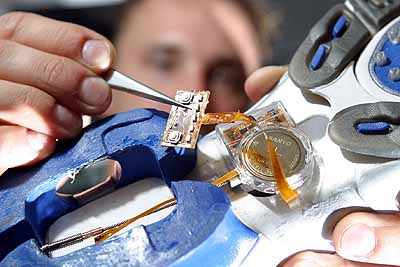 The microprocessor in this sneaker calculates the pressure between the runner's foot and the ground five million times per second and continuously adjusts the comfort level (a motor lengthens and shortens a cable attached to a plastic cushioning element). (Image courtesy of adidas-Salomon AG.)