A playback machine for vinyl phonograph records, which were a major music distribution medium throughout the 20th century. The turntable contains a rotating platter for the disc and an arm that holds a cartridge and needle (stylus). The needle is a diamond chip attached to a metal cantilever that causes a coil or magnet to move inside the cartridge as it bounces along the sound wave undulations "carved" in the V-shaped grooves of the vinyl.

Records Degrade With Usage
A major problem with vinyl records is the wearing of the inner surfaces of the groove by the needle. Over the years, an enormous amount of mechanical engineering went into the design of turntables and needles that would accurately track the grooves with as little pressure as possible.

Still Made
Analog turntables are still being made and used by people who have extensive vinyl record collections as well as by disc jockeys (DJs). See vinyl record, record player, LP, Laser Turntable, USB turntable and DJ turntable. 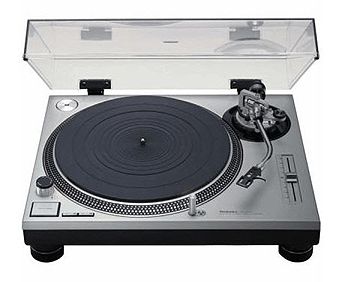 Popular for decades, Technics turntables were the first to include variable pitch control, which DJs use to create special sound effects. (Image courtesy of Panasonic Consumer Electronics Company.) 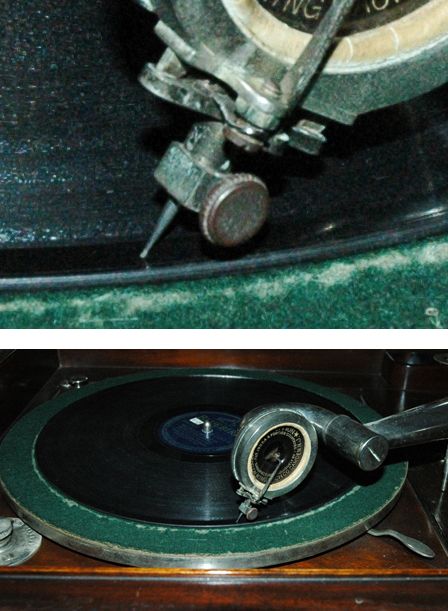 A marvel of technology in 1913, this RCA turntable was hand cranked to spin 78 RPM records. Note the size of the needle used to track the grooves. Subsequent needles were minuscule by comparison. (Equipment courtesy of the Lumberville Store, Lumberville, PA.)

Lest one think turntables are a 20th century phenomenon, these units were just a few of the turntables showcased at the High Performance Audio show at CES 2010 in Las Vegas. The most extreme unit (top) was $96,000 without tonearms and cartridges. See CES.