A highly automated home. Also called the "connected home," the dwelling is networked not only for computers and entertainment but also for security, heating, cooling, lighting, as well as control of appliances, including robotic vacuum cleaners and lawn mowers. Smart homes might rely partially or entirely on Wi-Fi and other wireless communications such as Bluetooth, ZigBee and Z-Wave. Increasingly devices are only wireless and have no Ethernet connectivity.

Virtual Assistant Control
Rather than installing separate home control networks, virtual assistants in phones such as Siri and Google Assistant as well as stand-alone desktop assistants like Alexa, HomePod and Google Nest, are widely used to control smart devices. Even Cortana in Windows 10 can be a smart device hub. This popularity is primarily due to the fact that these products already exist in people's homes. Thus, if they were not designed for this from the beginning, they have been subsequently enhanced to control lights, cameras, thermostats and other smart home appliances. See home control network, domotics, Siri, Google Assistant, Amazon Echo, Google Nest, Apple HomePod and wireless router. 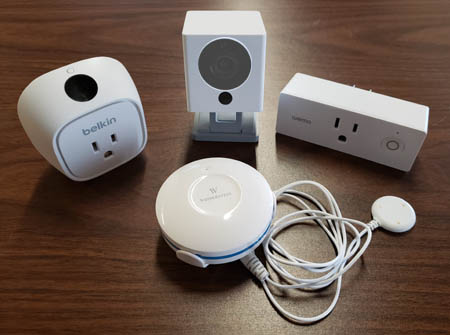 Increasingly smart plugs (left and right) are used to turn lamps on and off by voice command to a virtual assistant. Security and nanny cams are widely used (top), and water sensors detect flooding conditions in basements (bottom).