A wireless telephone that transmits to and receives signals from a base station within a range of a couple hundred feet. The first landline phones not tethered to the desk or wall, cordless phones were invented in the 1950s but did not take hold until the 1980s. Initially transmitting analog signals at low frequencies, the 900 MHz band was chosen as the standard by 1990. Cordless phones subsequently migrated to digital transmission and frequencies from 1.8 to 5.8 GHz (see DECT). Contrast with "corded phone," in which the handset is wired to a phone plugged into a telephone outlet in the wall. Also contrast with "mobile phone," which communicates with cell towers (see cellphone). See multihandset cordless, cord cutting and wireless. 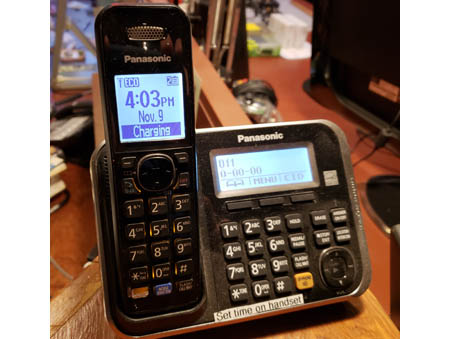 This Panasonic base station handles up to six handsets and connects to an analog phone line. Using rechargeable batteries, one handset resides in this unit, while the others slip into small charging cradles. The base unit is also an answering machine.