When one compares the internal magic of any solid state memory chip with a hard disk, it becomes very apparent that although disks are highly reliable, they represent an antiquated architecture that dates back to the 1950s (see RAMAC). Hard disks are mechanical. An access arm moves back and forth like a jackhammer over spinning platters.

Mobile devices use solid state drives (SSDs), and increasingly, so do laptop and desktop computers. In datacenters, SSDs are replacing banks of hard drives. Contrast this jackhammer-turntable architecture with the electron movement inside the flash memory chips of an SSD, and it becomes obvious that the total demise of hard drives is inevitable. It is just a matter of time. See SSD, flash memory and magnetic disk. 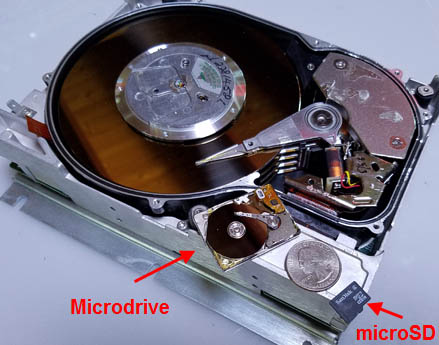 Hard drives are a marvel of mechanical engineering, but their days are numbered. The tiny microSD card is available with storage capacities 500 times the 1990s vintage hard disk shown here. The Microdrive is already history. See Microdrive and microSD.