The making of an integrated circuit (IC), widely known as a "chip," is perhaps the most amazing manufacturing process the world has ever conceived. A sliver of silicon smaller than a postage stamp can contain billions of transistors, which, acting like on/off switches, are the fundamental active components on the chip. It all starts with the design of the circuits, which carry electrical pulses from one point to another.

To learn the different types of chips, see chip. To learn about the unbelievable activity that takes place in them, see active area.

Pulses flow through transistors that open or close when activated. The current flowing through one affects the opening or closing of another and so on. Transistors are wired together in Boolean logic gates (see Boolean logic). Gates make up circuits, and circuits make up CPUs and other components. See Boolean Logic.

Computers make computers. The computer converts the logical circuits into a plumber's nightmare of transistors, diodes and resistors. These are turned into "photomasks," which are the lithographic plates used to create the patterns on the chip. Depending on the size and purpose of the chip, thousands, millions or billions of transistors are interconnected.

The photomask is the size of the chip replicated as many times as possible to fit on a thin slice of silicon from 25.4 to 300mm (1" to 11.8") in diameter, known as a "wafer." The transistors are built by creating subterranean layers in the silicon, and a different photomask is created to isolate each layer to be worked on (see Formation of One Transistor below). There may be dozens of photomasks to make one chip and hundreds of steps, both machine and human. From beginning to end, it can take several weeks to make a finished wafer.

People are always more flexible than computers and can find flaws that might go undetected by software analysis. (Image courtesy of Elxsi Corporation.)


CHIPS ARE JUST ROCKS
The base material of the wafer is usually silicon, although materials such as sapphire and gallium arsenide are also used. Silicon is found in quartz rocks and is purified in a molten state. It is then chemically combined (doped) with other materials to alter its electrical properties. The result is a silicon crystal ingot that is either positively (p-type) or negatively charged (n-type). Slices of the ingot approximately 1/30th of an inch thick are cut from this "crystal salami" to become the wafers.

The silicon ingot is being drawn from a scalding furnace containing molten silicon. High-speed saws will slice it into wafers about as thick as a dime, which will then be ground thinner and polished like a mirror. (Image courtesy of Texas Instruments, Inc.)


BUILDING THE LAYERS
Circuit building starts out by adhering a layer of silicon dioxide insulation on the wafer's surface. The insulation is coated with film and exposed to light through the first photomask, hardening the film and insulation below it. The unhardened areas are etched away exposing the silicon base below. By shooting a gas under heat and pressure into the exposed silicon (diffusion), a sublayer with different electrical properties is created beneath the surface.

The lady is wearing a "bunny suit," but is not wearing a mask, because the wafers have already been manufactured. (Image courtesy of Hewlett-Packard Company.)

Each chip is tested on the wafer. Bad chips are marked for elimination while the good ones are sliced out, placed into packages and connected by tiny wires. The package is then sealed and tested as a complete unit (see chip package).

Chip making is extremely precise. Operations are performed in a "clean room," since air particles can mix with the microscopic mixtures and easily render a chip worthless. Depending on the design complexity, more chips can fail than succeed.

This machine bonds the chips to the metal structure that will be connected to the pins of the chip housing and carry the signals to and from the circuit board. (Image courtesy of Texas Instruments, Inc.)

There is a never-ending thirst to build more and more transistors onto a single chip. In the early 1980s, the 8088 CPU chip in the first PCs had 25 thousand transistors. In 2002, Intel's Itanium 2 contained 220 million, and 16 years later, the transistor count on Apple's A12 system-on-chip reached 6.9 billion. See feature size and process technology.

From a CPU to an Entire System
Just as the chip eliminated cutting apart the transistors only to be reconnected in circuit patterns, increasingly, more functions are built onto the same chip, creating a complete system-on-chip (see SoC). A single chip in a smartphone can contain multiple CPUs, graphics units (GPUs) for rendering videos, camera processing circuits, system memory, as many as five radios for communications (cellular, Wi-Fi, Bluetooth, etc.) and more.

Science Fiction
The chip is truly science fiction today. Contemplate billions of transistors interacting to execute trillions of operations per second all taking place in more than a dozen interconnection layers that take up an area the size of a postage stamp, except... much, much thinner!!!

Building the Transistor
Following are the steps that create the layers of the transistor. While this shows one transistor, the steps are taking place on many transistors in all the chips on the wafer at one time. These are accurate but somewhat conceptual illustrations because the actual transistors are even more complicated. There are typically more layers and hundreds of steps to make a finished wafer.

The fabrication of the tiny transistor is an extremely precise one. The slightest contaminants in the air can render the transistor and chip useless. Putting on the "bunny suit" is an elaborate procedure. (Image courtesy of Intel Corporation.) 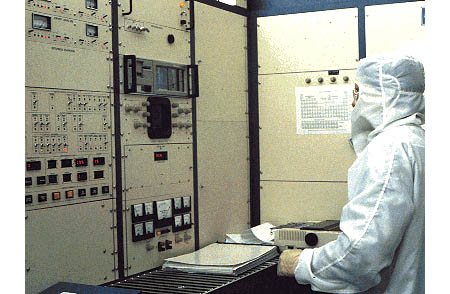 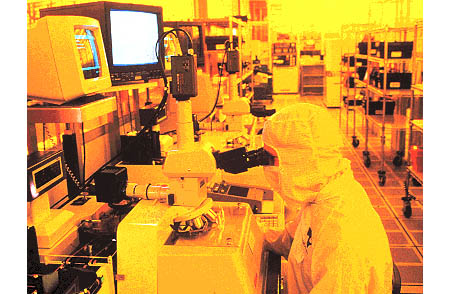 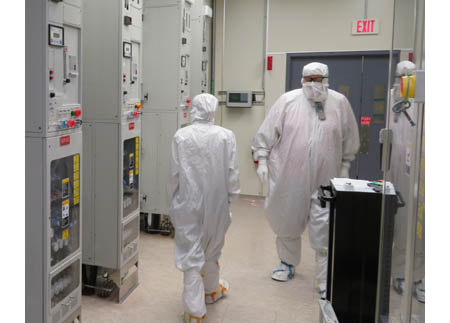 You won't catch the flu working in a chip fabrication plant, at least not in the clean room. Bunny suits and clean rooms are required to produce high yields of chips with as few defects as possible. (Images top to bottom courtesy of Texas Instruments, Inc., Motorola, Inc. and Microchip Technology Inc.)