(CELLular telePHONE) The first ubiquitous wireless telephone. Originally analog, all cellular systems today are digital, which has enabled the cellphone to turn into a handheld personal computer (see smartphone and cellphones vs. smartphones). A cellphone is also called a "mobile," "mobile phone," "handset" or "cell."

Introduced in the mid-1980s, cellphone sales exploded worldwide in the 1990s. By 2008, with three billion units in use, the cellphone became an addiction for many people, who would never leave their house without it (see nomophobia). By 2012, there were more than 300 million cellphone subscriptions (including smartphones) in the U.S. Although third-world countries adopted cellphones without ever having landlines, by 2016, half the homes in the U.S. relied only on cellular technology.

Major Carriers
In the U.S., the major cellular carriers are Verizon Wireless (formerly Bell Atlantic Mobile and Alltel), AT&T Mobility (formerly Cingular), Sprint (merger of Sprint and Nextel) and T-Mobile. In July 2019, the U.S. Justice Department approved the merger of Sprint and T-Mobile. Outside the U.S., the largest companies are China Mobile, UK-based Vodafone and Nippon Telegraph & Telephone (NTT).

Cell Technology
Geographic areas are divided into a number of slightly overlapping circular "cells." Each cell contains a base station, which is identifiable by its transmitting and receiving antenna located on a tower at the top of a hill or building. The base stations connect to the landline telephone system of the country and to the Internet.

The cellular system uses multiple base stations to cover a geographic area. As the mobile phone user travels from cell to cell, the call is automatically "handed off" to the next station. The more cells, the greater number of customers can be handled at the same time, because the same frequencies are reused within each cell.

As Europeans began to use their new-fangled Ericsson phones in the late 1800s, could they have imagined today's smartphones? Photo taken at Antoni Gaudi's famous "La Pedrera" apartment house in Barcelona. 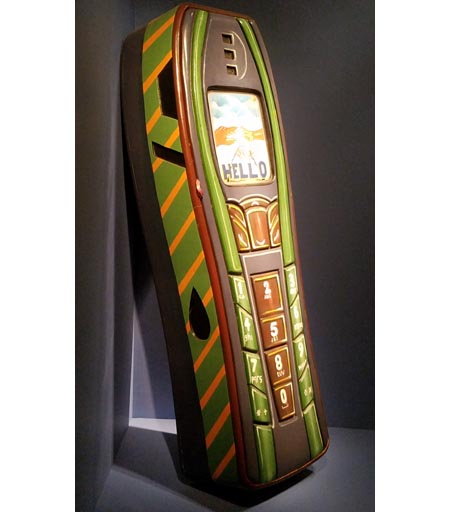 This is an example of a "fantasy coffin" in the National Museum of African Art in Washington, D.C. Popularized in the mid-1950s by Ghanaian artist Kane Kwei, each custom-crafted coffin was built to illustrate an important aspect of the deceased's life.