A display screen that is sensitive to the touch of a finger or stylus. Used in myriad applications, including ATM machines, point-of-sale terminals, car navigation and industrial controls, the touchscreen became wildly popular for smartphones and tablets after Apple introduced the iPhone and iPad.

The primary touchscreen advantage is the infinite ways the user interface can be designed compared to a set of fixed physical buttons. Even keyboards are simulated, and the devices can be programmed to accept hand printing, handwriting, graphics and finger gestures (see multitouch). Touchscreens can also be made resistant to harsh environments.

All touchscreens "digitize" the point of contact on screen into an X-Y coordinate. Following are the major categories.

Resistive - Pressure Sensitive
Like pressing a button, resistive screens must be tapped with a small amount of pressure. They use two active layers: a flexible plastic layer on top of a rigid plastic or glass layer, with insulated spacers in between. The layers are coated with indium tin oxide, and different voltages are applied across the coatings, typically alternating between the layers. When touched, the front layer picks up the voltage from the back, and the back layer picks up the voltage from the front, enabling the controller to determine the X-Y location.

Although the least expensive, the resistive method blocks up to 30% of the light from the screen due to the multiple layers and coatings.

Capacitive - Touch Sensitive
Capacitive screens are touched with a bare finger or stylus. Letting in more light than the resistive method, capacitive screens use a single metallic-coated glass panel. Voltage is applied to the corners of the screen, and when a finger touches the screen, it draws a tiny amount of current. The controller computes the X-Y location from the change in capacitance at the touch point. See stylus pen and touchscreen gloves.

Projected Capacitive
This capacitive variation uses a sensor grid sandwiched between two glass layers and allows for two-finger gestures such as pinching an image to make it smaller. When the screen is touched, the controller computes the X-Y location from the change in capacitance in the grid. Although the grid is embedded, the screen can be overlaid with a glass layer for more protection. See multitouch.

Acoustic Waves and Infrared
Acoustic waves or infrared signals are transmitted across the screen's external surface from the top and side. Typically used for interfaces with larger buttons, such as found on kiosks, when the screen is touched, receivers at opposite ends sense the blocked signals. Since these methods do not use active layers over the screen, they do not block any light. For protection, the screens can also be overlaid with clear, heavy-duty glass. 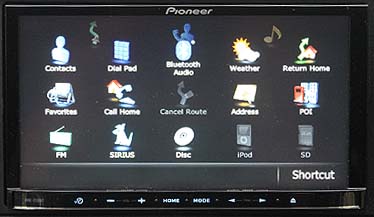 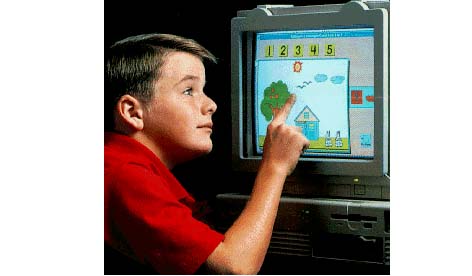 While all smartphones and tablets use some type of capacitive screen that can be lightly touched, resistive touch screens are also widely used. They require finger pressure as in this Pioneer in-dash unit (top) and educational computer (bottom). (Bottom image courtesy of Keytec, Inc., www.magictouch.com)