(2) (WeBLOG) A website that contains text entries in reverse chronological order (most recent entry first). Blogs cover everything from the latest news about a topic to personal journals to "ranting and raving." Written by one person or a group of contributors, entries contain commentary, observations and opinions and may include images, audio, video, links to other sites, as well as a search facility for finding past entries. As of 2020, there are more than 400 million blogs in existence, created by using services such as Wordpress, Tumblr and Blogger. See audioblog, vlog, Blogger, Tumblr and Wordpress.

More Personal, But Corporate Too
Informality and off-the-cuff opinion are what set blogs apart. The blog is often a passionate expression of one individual's thoughts, and blogs are expected to be truthful. Although ads were traditionally absent, they now appear regularly.

Companies encourage employees to write internal blogs to share knowledge, and they use public blogs to keep abreast of customer satisfaction and other issues. Customers often have great faith in employee bloggers. For example, a CEO who writes a blog may greatly enhance the company image as long as there is no hard sell.

The Blogosphere and Mainstream Media
Blogs and the major news networks often feed each other. What is published in one may be picked up in the other; however, blog commentary can become viral and spread very quickly. Depending on the situation, the "blogosphere" can be a more potent force than mainstream journalism.

Blog Software and Services
In the late 1990s, the first blogs were manually coded in HTML and uploaded to a Web server. However, when applications such as Pitas, Blogger and GrokSoup were launched in 1999, blogs took off. This template-based software made it a snap to publish a blog on the company's Web server and add entries without knowing any HTML (see blog publishing software). Soon after, blog hosting services came along that offered the same functionality on their own servers, allowing anyone to set up a free blog on the Web in minutes. A blog service is the simplest way for anyone to publish comments on the Internet (see blog service).

From Blog to Microblog to Twitter
The blog spawned the "microblog," a short blog about one's daily adventures, which evolved into the wildly successful Twitter. 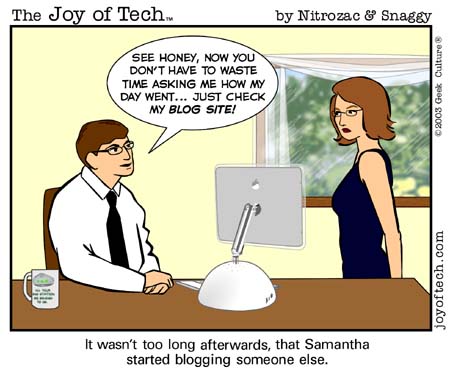 From "The Best of The Joy of Tech" cartoon book by Nitrozac and Snaggy (O'Reilly & Associates, Inc., 2003). (Image courtesy of GeekCulture, www.geekculture.com)