(2) An electronic device that records airplane flight data. Officially a "flight data recorder," the unit is highly protected and can emit a signal for up to 30 days after a crash, even underwater. First used in the late 1950s, Australia was the first country to require them. Dating back to the late 19th century, a "train event recorder" or "on-train monitoring recorder" (OTMR) is the equivalent device in a locomotive.

(3) An electronic device that records driving data in motor vehicles, most notably their speed. Officially an "event data recorder," automotive black boxes were first used in the late 1990s.

(4) Any custom-made electronic device can be called a black box, typically made to solve some interfacing problem. Such devices were named black boxes because they were often housed in plain containers, and their purpose may even be a mystery to the experienced observer. However, yesterday's black boxes sometimes become today's off-the-shelf products. See COTS.

Without logos or identifying marks, a black box can be any device custom made to solve a problem. 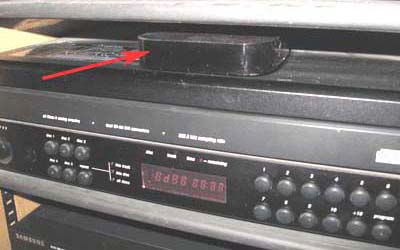 The 10-ounce device lying on top of this CD changer is an Apple TV set-top box. See Apple TV.