Also called the "system board," "main board" "base board" or "logic board," it is the primary printed circuit board in a computer or other electronic device. In a modern desktop computer, the motherboard contains CPU and RAM sockets and the chipset, which houses the control circuits for all primary peripheral devices (drives, keyboard, mouse, etc.). A motherboard also has PCI-Express slots for a high-end graphics card or other peripherals. Laptop motherboards have peripheral expansion via external ports (see USB and Thunderbolt).

Chipset, CPU, Bus and RAM
Every motherboard contains a specific chipset and a slot for one type of CPU chip, and these change periodically as does everything. While PCI Express (PCIe) has been the dominant bus for more than a decade, a newcomer is the tiny M.2 interface. New motherboards may have one or two M.2 slots along with a half dozen or so PCIe slots. See M.2.

This earlier Baby AT style motherboard required plug-in expansion cards for almost all the peripheral devices. ISA slots are long gone, and AGP was replaced with PCI-Express.

On earlier PCs, cards were required for all peripheral devices except keyboard and mouse. Today, enthusiasts may plug in a faster graphics card, otherwise all peripheral control circuits are in the chipset on the motherboard. See chipset. 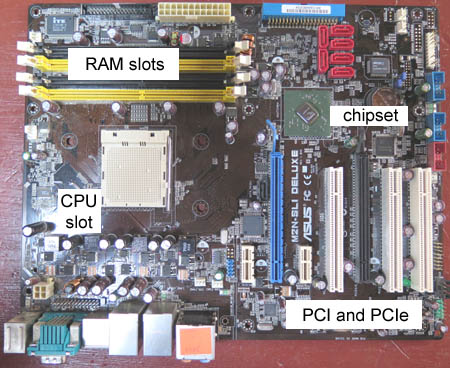 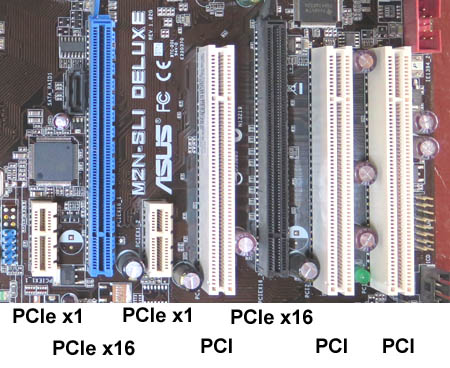 When building a PC, the CPU, RAM and peripheral expansion cards must be added. The chipset is already on the motherboard. Because this motherboard was offered during the transition from PCI to PCI Express (PCIe), both sockets were provided.

This is the front and back of the prototype of the first IBM PC motherboard in 1981. The chips are wired together on a "breadboard." (Images courtesy of IBM.) See breadboard.