A device specialized for reading barcodes and converting them into digital data. Pen scanners, also known as wand scanners, were the first type of scanner developed in the 1970s. The tip of the pen must physically touch the barcode. Later, laser scanners allowed the code to be read at a distance from the head of the device, enabling supermarkets to read round cans and flexible packages more easily. The most common type today is the visible laser diode (VLD) scanner, which emits as many as 50 laser beams simultaneously to capture the image at any angle. See barcode, mobile tagging and point of sale.

A laser diode (1) emits a beam (red) onto a combination of rotating (2) and fixed mirrors (3) that shine multiple beams onto the barcode (4). Although as many as 50 beams may hit the package at different angles, only one is shown in this illustration. The reflected light (yellow) is captured by the collector (5) and aimed at a sensor (6).

The black bars absorb light, while the white bars reflect it. Photo diodes turn the reflected light into an electrical signal, which is converted into digital pulses.

Modern omnidirectional scanners make it easy to capture the code at all angles with less precision required on the part of the human operator. 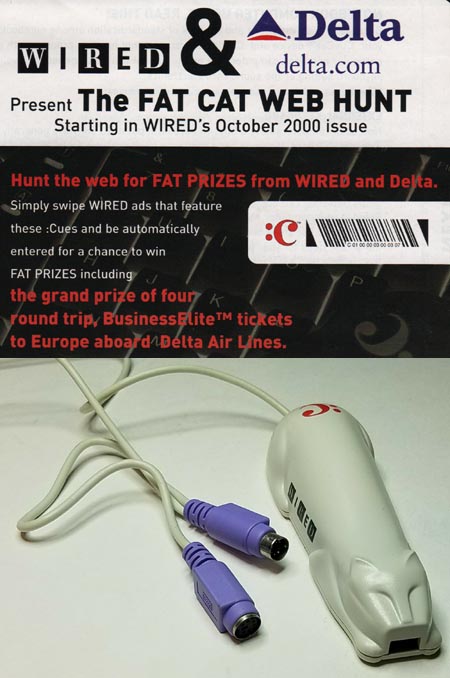 As the Web was exploding at the turn of the century, this scanner was created to give businesses a Web presence. Connected to the PC, users could scan a printed Cat code and quickly get a Web page. Another part of the system was software for the PC that had to be connected to the audio output of a TV. It would listen for special Cue signals and deliver the Web page. With four million CueCats given away and $185 million invested, the Dallas, Texas-based firm fizzled to nothing in a short time.