Pronounced "zy-write." A venerable text editor and word processing program developed by XyQuest, Inc., Billerica, Massachusetts. Introduced for DOS in 1982, XyWrite provided complete typographic control over the page layout. Throughout the 1980s and 1990s, it was used extensively in the newspaper and magazine industry as well as by professional writers worldwide.

The most user-customizable word processor ever developed, XyWrite offered a mappable keyboard, customizable menus and a complete, although extremely cryptic, programming language that could manipulate text in any manner.

Like HTML and XML
XyWrite generates ASCII text and uses embedded tags like HTML and XML but with different open/close characters. XyWrite tags appear as triangle symbols, but their actual codes are quickly revealed. This single feature made XyWrite indispensable for newpaper editors who needed to edit typesetting commands but not be distracted from writing (see image below).

From DOS to Windows to Nota Bene
XyWrite III Plus was the last of the original DOS line. XyWrite 4 for DOS evolved from Signature, an IBM product intended to supersede its DisplayWrite word processor, but Signature never came to fruition. A Windows version was also created (see XyWrite for Windows). In 1992, XyWrite products were acquired by The Technology Group, Baltimore, MD, which closed its doors in 2001. However, XyWrite lives on in the form of Nota Bene, a technical word processor based on XyWrite code (see Nota Bene).

This encyclopedia is maintained in a custom-programmed version of DOS-based XyWrite III Plus. At month end, conversion programs written in C turn the XyWrite files into an XML master from which other formats are derived. This example shows how XyWrite's unique tagging system displays unobtrusive triangles (top) that are easily revealed with a keystroke (bottom). 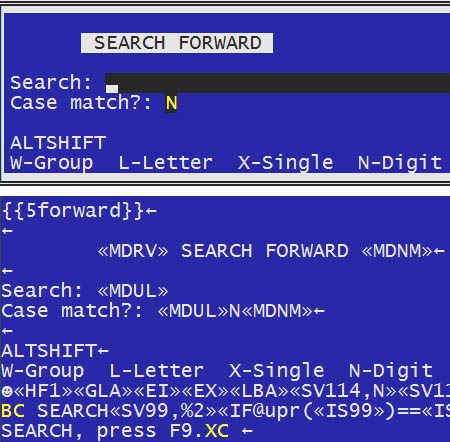 Although XyWrite was a command-driven word processor, every function could be turned into a menu as in this Search example. This shows a snippet of the programming code necessary to display the menu. 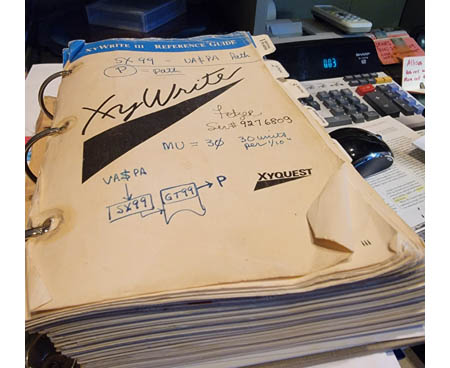 XyWrite has its own programming language that enables text to be manipulated in myriad ways. As is evident by the size of this well-worn 640-page programming manual, the XyWrite language is very comprehensive.