(WIreless GIGabit) A short-range wireless technology introduced in 2009 by the WiGig Alliance, which was later absorbed into the Wi-Fi Alliance. Using the unlicensed 60 GHz band, WiGig was designed as a cable replacement for home theater equipment as well as wireless docking for mobile devices. Supporting a 7 Gbps data rate, WiGig offers more bandwidth than Wi-Fi but also throttles down to Wi-Fi speeds in noisy environments. However, if the signal has no obstruction, it can transmit up to 60 feet. See wireless dock. 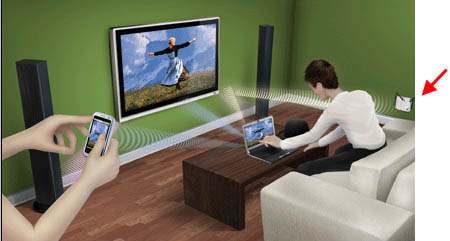 WiGig eliminates cables and clutter when TVs are wall mounted. At 60 GHz, the five-millimeter wavelength is highly directional, and beamforming bounces signals from the router (red arrow) off the wall to the laptop in this example. See beamforming. (Image courtesy of the Wi-Fi Alliance.)