(1) (Wi-Fi Protected Access) A security protocol for wireless 802.11 networks from the Wi-Fi Alliance that was developed to provide a migration from WEP. The WPA logo certifies that devices are compliant with a subset of 802.11i, while WPA2 certifies full support.

Strong Security
WPA and WPA2 use a sophisticated key hierarchy that generates new encryption keys each time a mobile device establishes itself with an access point. Protocols including 802.1X, EAP and RADIUS are used for strong authentication. A RADIUS server provides automatic key generation and enterprise-wide authentication.

For home and small business users who do not have an authentication server, WPA can be used in preshared keys (PSK) mode, which requires that a shared secret key be manually entered into the access points and each user's computer. The shared secret is used to automatically generate the encryption keys.

WPA3 (2018) - More Secure
WPA3 provides an encrypted connection in public hotspots. It also makes it extremely difficult to hack the password of the user's connection because a brute force attack would require interaction with the user's Wi-Fi for each "guess" (see brute force attack). In addition, if the password is eventually deciphered, "forward security" prevents the decryption of any data previously captured. 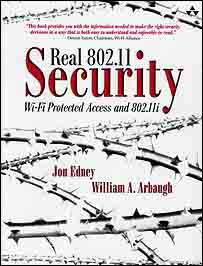 Jon Edney and William Arbaugh's "Real 802.11 Security" (Pearson Education, 2004) covers every technical detail you will ever need to know about 802.11i, WPA, WEP and other related protocols. It is also a great primer on wireless security in general.